Annapurna Circuit Trek is the most popular trek in Nepal. The pristine natural beauty of this region has made this trek so known and wishable. Yearly around 70,000 trekkers from all over the world come to Nepal to do the Annapurna Circuit trek. The trend is ever-increasing since its opening in 1977 A.D.

The teahouses and lodges of Annapurna circuit trails provide basic services like food and accommodation. But that is not enough for people of today, there is one more thing that is Wifi or the Internet. People want to stay connected with the internet, no matter what time or what place. Thus, everyone has the question “ Is wifi service available in the Annapurna circuit trek or not? We’ll provide all the Annapurna Circuit WIFI/Internet mediums here:

Internet and WIFI facilities are installed in most of the teahouses and lodges of Annapurna Circuit trek trails. However, some places of trek do not have internet services due to the difficult topographies and technical problems. But overall, you can expect WIFI service in most of the lodges or teahouse of the trek. The owners of lodges think that having free-wifi attracts more guests than not having the WIFI.

Some of the lodges provide free wifi and some of them charge a small amount, it depends on where you are staying. Most of the time it’s free but doesn’t expect it everywhere. Those wifi billing lodges can charge any amount around 1$ to 4$(wifi+mobile/equipment charging).

Some Annapurna Circuit places that are WIFI equipped are Birethati, Ghandruk, Tatopani, Ghandruk, Jomsom, Muktinath, Thorong Phedi, High Camp. Among these places, Thorong Phedi and High Camp are technically high areas, and using WIFI in these areas can cost around 2$(NRS200).

While using the Internet throughout the Annapurna Circuit Trek don’t expect stable signals and high-speed Internet. The wifi here in the trails are only enough to send some messages and pictures. You can’t stream high definition video here, even if streamed it will take a lot of time. Hence, don’t completely rely on Internet service. It is not a bad thing to stay away from the Internet world for a while in the mountains.

It is the only available alternative for the Annapurna Circuit Wifi service. You can access the internet in Annapurna Circuit via Sim Card Internet. NCELL and NTC are the two sim card companies which are popular as the best SIM card for trekking. For getting Nepali Simcard, you will need a passport-sized photo and one photocopy of passport.

Among NTC and NCELL, NTC is most suitable for Annapurna Circuit trek as it even works in the most rural part of Nepal. You can expect 3G services in most of the places in the Annapurna region while using NTC sim. However, the chances of getting full network coverage during the Annapurna circuit trek is 25%. You have to subscribe to the internet package to use the internet via NTC sim. For a 1GB data package, you have to pay NRS500(5$) which is valid for 30 days. You can subscribe to less or more data depending upon your requirement. The internet speed of NTC Simcard is not that super fast, it is okay but it has wide network coverage. 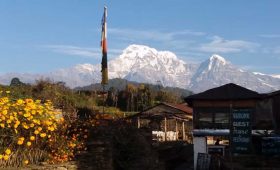 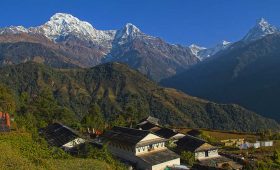 Khopra Danda Trek Without A Guide