Home>Manaslu > Where is Mount Manaslu Located?

Manaslu, which stands for “The Mountain of the Spirit,” is the name of a picturesque mountain in the west-central part of Nepal. It is not just an ordinary mountain, height-wise, with a height of 8,163m(26,781ft); it is the eighth tallest peak globally. Being one of the eight-thousanders, Mt Manaslu indeed is a subject of interest for every mountaineer. Moreover, the region that the mountain looks over, the Manaslu Region, is a prominent trekking destination for the trekkers in Nepal. So, the word “Manaslu” has got the attention of both trekkers and mountaineers.

The first question of every Manaslu admirer is, “Where is Mount Manaslu Located?”. It is an obvious one as well. You certainly would want to know about the location of your desired destination. Knowing the slightest information about the destination is very much helpful to a traveler. We understand the importance of information about Mt Manaslu for you. Therefore, we will give you the exact and entire knowledge about Mt Manaslu and the Manaslu Region.

It is a detailed article on “Where is Mount Manaslu Located.” This article will cover anything and everything that connects with Mt Manaslu. Hence, you will need some time to read all the information out. Make sure you are available to read through the last. Let’s roll on! 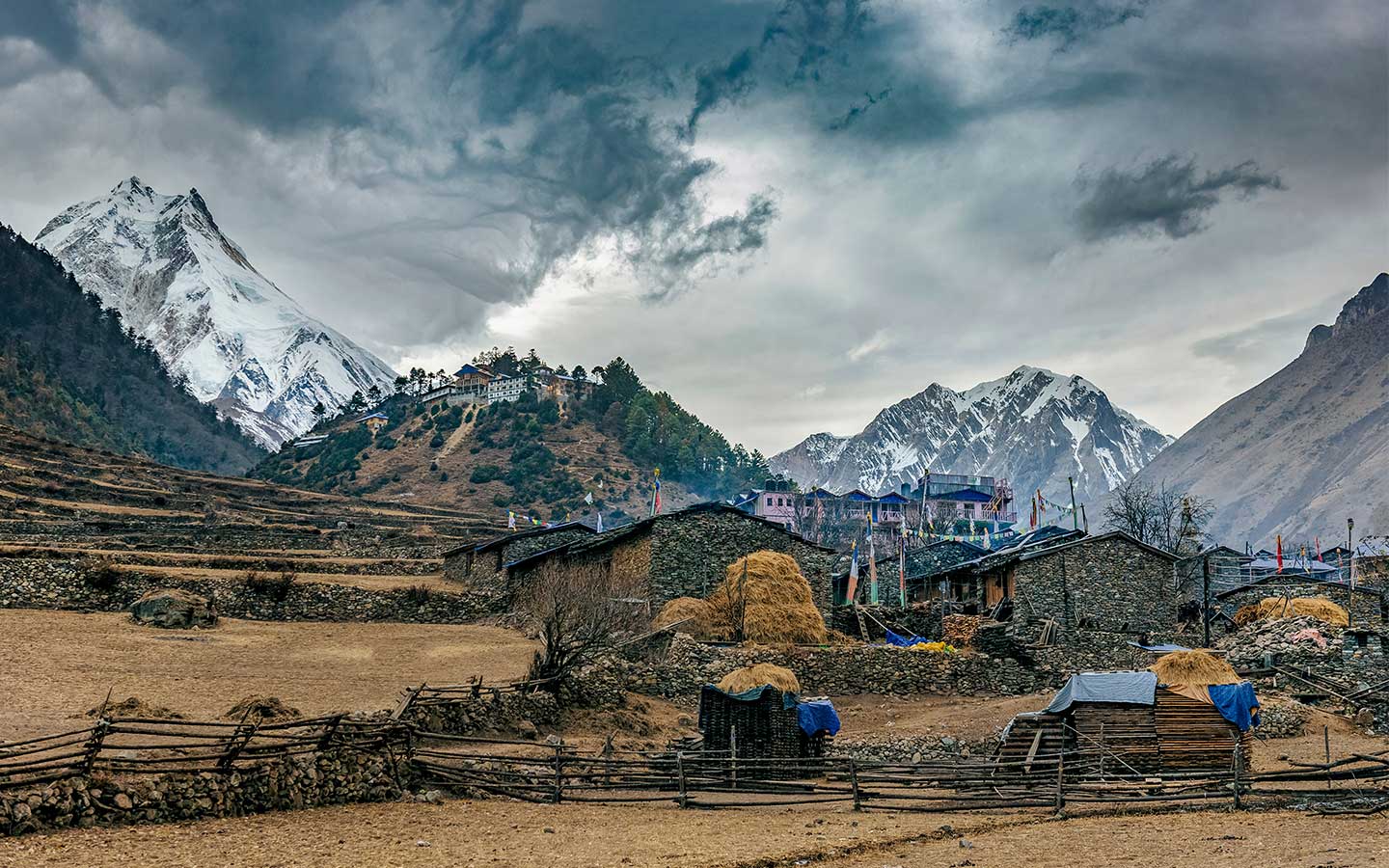 Where is Mount Manaslu Located?

Mount Manaslu stands firmly on the west-central side of Nepal in the Gorkha district. The exact coordinates of the mountain are 28°32’58” N 84°33’43” E. About 64 KM east of Mt Annapurna I – the tenth tallest peak in the world, Mt Manaslu lies entirely on the border of Nepal in the Mansiri Himal Range of the Himalayas. It is the only third Nepali eight-thousander mountain that does not share its location with other countries(Tibet or India). Mt Annapurna and Mt Dhaulagiri are the rest of them.

Moreover, the peak is cornered by the Ganesh Himal(7,422m) and the Budhi Gandaki River Gorge on the east and by Marysangdi Khola and Annapurna Range on the west. Likewise, the famous and historical Gorkha Town is to the south of the mountain.

Altogether, there are six instituted trek routes to the foothills of Mt Manaslu. The Manaslu Conservation Area is the protected site that comes across the way to the mountain. The site, which is 1,663 square kilometers wide, is home to various flora and fauna. Manaslu Circuit Trek, the most sought-after trek of Nepal, is a trek that takes you all around the Manaslu Region is also in the same region.

Manaslu Region is formed with a diverse topography like every other mountainous region in Nepal. From Sub-tropical Himalayan foothills to Transhimalayn pastures, from tropical hills to arctic mountains, from broad glacier valleys to long ridges, Manaslu Region is a blend of numerous things. The lowest point of the Manaslu Area is Arughat(941m), and the highest is the Summit of Mt Manaslu(8,156m) itself.

Moreover, Mt Manaslu is surrounded by long moraines, glacial valleys, mountain passes, and icy mountains. Larkya La Pass(5,106m), the most famous mountain pass and the endpoint of Manaslu Circuit Trek, resides north of the hill. The peak is also adjacent to mountains like Himalchuli(7,893m), Ngadi Chuli(7,871m), Shringi(7,187m), Langpo(6,668m), and Saula(6,235m).

Similarly, in the subalpine zone, the average annual temperature is around six °C to 10°C. The climate becomes chilly as the area receives snowfall and rainfall. Lastly, the arctic zone lies in the permanent snow line, and the temperature is always below the freezing level. This is how the temperature fluctuates among the different climatic zones.

Yet, the coldest season of all is Winter which runs from December to February. During this season, most of the region’s places receive snowfall, and the temperature is mainly around the freezing point. And similarly, the area becomes the wettest in the Summer(Monsoon Period). The season spread across June to August. In total, the Manaslu Region receives rainfall of about 1,900 millimeters annually. Of which most of the precipitation occurs during Monsoon only.

However, the region stays at the most comfortable temperature and conditions during Autumn and Spring. September to November and March to May are the periods of Autumn and Spring, respectively. During these two seasons, the weather becomes stable and friendly. Warm temperature, clear mountains, bright visibility, fewer chances of rainfall, and snowfall are some of the occurrences of the seasons. Hence, you will find most climbers and trekkers lurking towards the Manaslu Region in Autumn and Spring.

First thing first, Manaslu Region is more about mountaineering. The reason for that is the existence of the eighth tallest mountain globally, Mt Manaslu(8,163m). Ever since its successful ascending by Toshio Imanishi and Gyalzen Norbu- a Japanese expedition team on May 9, 1956, the peak has become an adventure for many avid climbers. As it was climbed by a Japanese team initially, this peak is also called a Japanese Mountain.

To climb Manaslu is a different level of adventure and challenge in itself. It is one of the most treacherous peaks to climb in the world. According to alpine grading, Mt Manaslu is a 4E Alpine Grade Mountain, and such mountains are technical and severe. If you can overcome anything that Mt Manaslu has to put up with, then you will remember this experience for the rest of your time on Earth. The Manaslu Expedition will be the ladder to the other adventurous peaks.

The journey of 47 days begins from Kathmandu with a scenic drive to Arughat. From there, the trek of the expedition starts towards Sama Gaun. You will reach Sama Gaun after trekking for nine days through the foothills of the Manaslu Region. In Sama Gaun, you will have an acclimatization day before heading in the direction of Manaslu Base Camp(4,750m).

The trail further from the base camp is over the glacier, where you have to cross serious sections and crevasses. Following this part, you will make it to Manaslu Camp 1(5,700m). It will take about 25 days to climb the summit from the base camp. In that time, you will have a couple of acclimatization days at the camps of the mountain. Moving upwards to Camp 4(7,400m) from Camp 2(6,400m) and Camp 3(6,800m), you will become used to the hardship of the Manaslu Expedition. Traversing through the steep sections, you will end up in Camp 4 before pushing for the summit.

It will take all you have got to reach the summit from the summit camp. The summit is exposed to a technical traverse of around 70 meters only. And the path to the summit from the Summit Camp is divided into three steep parts. Upon the climb of the peak, you will enjoy the spot of cornering mountains like Ganesh Himal, Manaslu North, etc. Afterward, you will gradually descend back to the Manaslu Base Camp before joining the retracing trek back to Arughat. 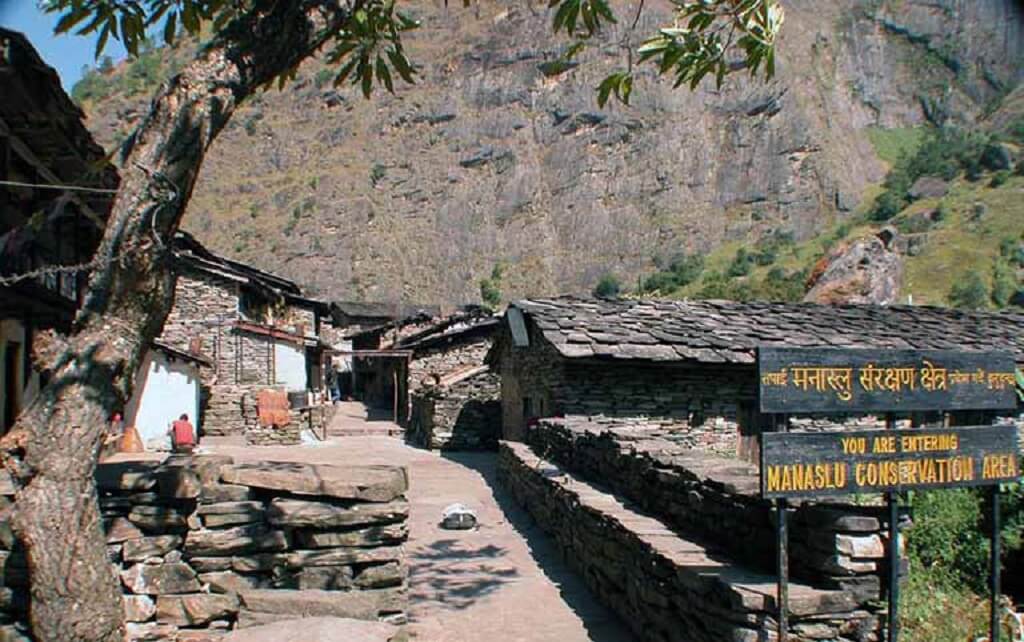 Day 39: Descend back to Sama Gaun

Day 41: Drive Back to Kathmandu

The best time for Manaslu Expedition is Autumn(September to October) and Spring(March to May). In contrast, the low seasons for the climb are Winter (December to February) and Monsoon(June to August).

Manaslu Circuit Trek is another option that you can be on in the Manaslu Region. It is the trek that takes you to one of the heavenly off-the-beaten tracks in Nepal. Not trekked by many, Manaslu Circuit Trek is a raw adventure in the lapses of the eighth highest mountain in the world. There is no match to the beauty of this trek. It goes through the beautiful hillocks of the Manaslu Region and finishes just below the mountain at Larkya La Pass(5,106m).

The trek is remote and wild as it touches many traditional settlements of the Manaslu Region. In those villages, you will meet the most lovely people in the world. Moreover, the wild side of the trek is about the Manaslu Conservation Area. The protected area is abundant in rich flora and fauna. The trekking route of Manaslu Circuit Trek is around 177km long, which opened in 1991. You will trek on the circuit that will take you to every corner of the Manaslu Region. There will be no lack of mountain views as you will spot various snow-covered peaks. Other than Manaslu, HImalchulu, Shringi, Ngadi, Chuli, Saula are the major peaks of the region you will see throughout the trek.

It takes around 15 to 17 days to complete this worthwhile trek. The trip’s trail is a little hazardous and will surely demand some hardship from the trekkers. Trekkers with sufficient cardio training and preparation can do this Circuit Trek of the Manaslu Region. 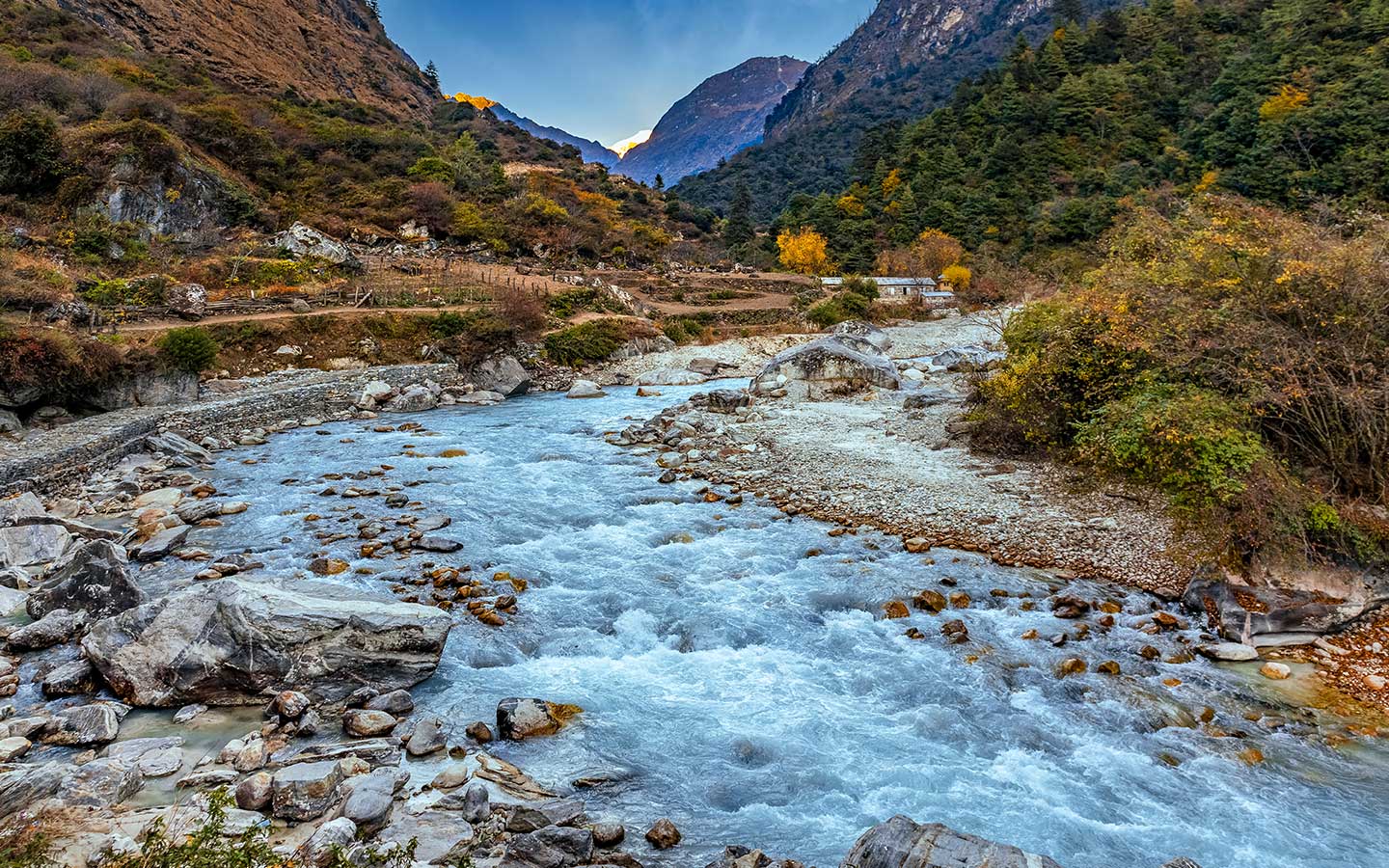 For Manaslu Circuit Trek, the best times are Spring and Autumn. Throughout these two seasons, you will experience excellent weather conditions in Nepal. Most of the trekkers like to do the Manaslu Circuit Trek in those two seasons. That means the two unfavorable times for the trek are Winter and Monsoon. In these very times, you will have to go through difficult and unpleasant conditions. And it is always tricky to hike when the weather conditions are not in your favor.

We hope you have found your answer to the question “ Where is Mount Manaslu Located?”. In addition to that, this article tried to provide you with other essential information about the Manaslu Region. After reading this article, you surely know so much about the region. If you got what you were looking for, our effort was worthy. Thanks for reading.

Do not forget to read out other articles that are available on our website. We, Radiant Treks, want to impart full-fledged information to the readers on trekking in Nepal.